I hate spam. If you don't hate spam something's wrong. This is about ********.com and a poorly drafted spam message.

Now I've got as much patience as the next person but what irritates me more than anything is unsolicited email. I can take them with a pinch of salt of course - but this one particular day I lost my temper with ********.com, and here's why:

LinkedIn - great website, the world's largest professional network with more than 225 million registered users. I'm on there everyday. I love it. I often get unsolicited emails from various contacts AND non-contacts, but I don't mind them because most people, myself included, are polite enough to apologise for sending messages or email. Take this example, from my account in LinkedIn from a recruiter, nice and polite, and professional, bearing in mind it is unsolicited:
BUT note the words in the message, "I hope you don't mind me dropping you a direct message...". This I do not mind, for the fundamental reasons that the person has:
1. Taken the time to excuse themselves
2. Take the time to draft the message
3. Taken the time to write the message properly in standard English.

I was happy to receive this spam because Mr Livesey was professional; I politely replied, thanked him for the message, explaining that at this point in time his proposal was not needed.

NOW TAKE THIS EXAMPLE I RECEIVED FROM ********.com. This I very much did mind for these reasons:
I detest this sort of idiocy with a passion. If this person had taken the time to draft his email properly instead of copy and pasting to spam, not to mention having the audacity to use LinkedIn to pretend to professionally spam, I might not have replied in the manner I did by emailing him a 'silly twat' message. Furthermore, the subject matter provoked my moral sensibilities - BLOGGER OUTREACH PARTNER PROGRAMS - can be nefarious businesses, especially since the jury is out on how Google's web spam team views these networks vis-à-vis busted link networks like Sape, and Ghost. I've seen enough online SME's being destroyed because of agencies doing dodgy link building - this doesn't justify my responding with a 'silly twat' message - but had I received a proper measured email not one copied and pasted I will have responded in equal measure.

As I said I would not have replied as aggressively as I did had I not believed that some bot or program had just spammed my social network inbox via some company I'd never heard of. Wait!! The message was written by a human-being... which makes it all the more appalling.

Little did I know that I was to receive a stream of abuse from spammer.com's Vice President of Sales. Did I deserve this? OK, I was rude but so was his response. So perhaps I deserved it but do I accept it. No. I didn't start this conversation (I was spammed, remember.) but I certainly ended it - by doing the decent thing and not taking this idiot's bait because baiting it was. Instead of his apology which would have elicited my own apology he called me 'rude prick' and then went on to accuse me of hiding behind my keyboard in spite of his veiled threat at the end. I just ignored him.
[the image below is our social exchange, please read his response from bottom upwards, thanks]
My response was more measured and I politely replied that as an employer (as he kindly pointed out to me) he should be ashamed and summarily informed him to stick his spam down his mouth.

Ironically I had managed to elicit wrath despite not wanting to solicit spam and the VP further responded by calling me a 'little insignificant man', 'a wounded little girl'.

I responded noting the irony of his deluded messages. He took offence at this and replied, "Look at little Stewie he learned the big boy words. next time(sic) I am in the UK we should connect and talk face to face...".

I didn't respond. I couldn't be bothered. So why I am writing this now? 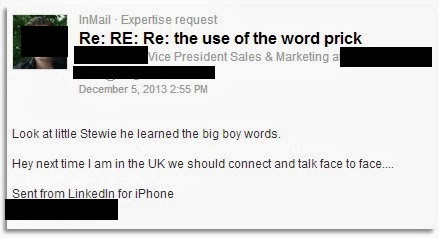 Because I believe companies, whether SME or not have a duty of care and cannot just run rough-shod over whoever they like with impunity. Just because they believe they are on some moral digital crusade doesn't justify their spamming LinkedIn users (I'm sure I'm not the only one) then when they don't like aggressive responses they respond in kind. Is this their business model?

Please tell me you hate hate spam to? Or am I wrong because I signed up to LinkedIn's terms and conditions so I should accept these messages? I would never dream of sending out copied and pasted messages to a client or customer - it is ridiculous and lazy - no wonder I responded as I did.
Posted by Meaning For Looking at 16:48 No comments:

Here we are again. I remember the Google Penguin fan-fare last year in April, it was nerve wracking.

At the time, nobody seemed to understand what to do - we were all ambling round waiting for the dust to settle so we could settle down and analyse the data.

It was funny; a lot of so called marketing experts from a few bigger digital agencies (no names) waffled and squirmed about the algorithm. The truth was, nobody really knew - it was all waffle.

I've been involved in search marketing now since 2006; not a long space of time compared to some industry giants that frequent Moz and Search Engine Land. However, I do come from an English teaching background and worked in information retrieval for several years as a library assistant so I picked up lots of positive habits working inside a real search engine...!

Once again, a Penguin algorithm change rolled out last weekend. Matt Cutts made some flippant comment on Twitter a few months ago about it going to be a 'great summer' - no it wasn't. Not for SEO's working with demanding clients and expectations.

Often with these things it takes a degree of learned skills and also instinct to spot changes to a website as a result of an algorithm change. We've come a long way since last year. We now know a great deal thanks to the research being done.

But being bombarded with Google algorithms doesn't make it a 'great summer', or year for that matter. Google isn't getting better at providing great search results. It's making it harder for the legit SEO and easier for the gamers.

However, time will how far this recent Hummingbird impacts the SERPS, and for that matter SME's up and down the UK.
Posted by Meaning For Looking at 20:55 No comments:

The Seven Sisters... words of terror to anyone that knows them. And it, Pirbright.

Typical. Such a word conveys goodness, light, safety. No. Pirbright. It's a deception. At the time of walking, no RUNNING over them many many times, not only I but more or less everyone felt like dying. 7 hills. Why are they given a female personification? The pain in your chest and legs was like nothing I had ever felt. I was only 20, if I did it now, I would die a horrible death.
Physical fitness is wonderful, the sensation of accomplishment it creates is unrivaled. Never I have felt such joy and exultation at achieving physical perfection. The pain and suffering was worth it.

At the time instructors and trainers behaved like animals; you felt like they hated you and hated weakness. It was about power and humiliation, to make you appear soft and insignificant. Only when you crossed the finishing line did you understand the trainers were for you, on your side; they wanted you to succeed and win. At the time it was absolute chaos - the noise and scream were ceaseless. I was fortunate that in my own pain I could tolerate it because I have practiced before I journeyed here. By the time of Pirbright and the Seven Sisters, I was fitter than I had been. Running then over those hellish hills, I passed the occasional body writhing on the ground in pain - there was a moment during the first attempt when I wanted to give up, I hated it. I saw someone crying in pain; they looked ridiculous in their suffering. I forces myself that I wouldn't demean myself and pride was more powerful than pain. I went on and completed it. The end result was even more pride at the achievement and those that had fail were pushed to an even greater extreme to achieve what I and others had.

There are no platitudes spared; the instructors were merciless. They had to be. Not everyone is self-motivated. Some are more equal than others.
Click to see Stewart's Google+ Profile
Posted by Meaning For Looking at 11:38 No comments:

It wasn't me - but the choice was an inevitable one. I resigned myself to the fact that I deserved my fate and if this was it, then so be it.
It made me a tougher and more resilient individual and by God I needed to be. The first few weeks were an utter nightmare - in all truth, I started to question why I was there and why I decided to do this. I expect many do question their motives for joining this insane institution.
I really wanted to go back to the peaceful life and my books but I knew deep down that I would stagnate back home, and nothing much would happen. People and friends had moved on so why go back home?
I accepted where I was and decided to remain there. I did for more than 3 years.
But to my surprise, once I got through the initial months of training and was posted to my regiment 8 months later, life became good and full of surprises.
The first 3 months were atrocious - whatever hard labour must have been like in Victorian times, I was in it. 3 months hard labour. My offence? Ignorance. After that, I left the prison and got, amazingly, weekends off for the first time in what felt like years.
I found myself on nights out in Soho, Bracknell, Camberley, places I thought I'd never visit. I then ended up driving across the Yorkshire Moors for 2 months. At the time I hated it and loathed myself but in hindsight the first 8 months were an utter peak and trough of astonishing experiences. Had I known then what I know now 20 years later I would have savoured every moment...
Posted by Meaning For Looking at 11:15 No comments: